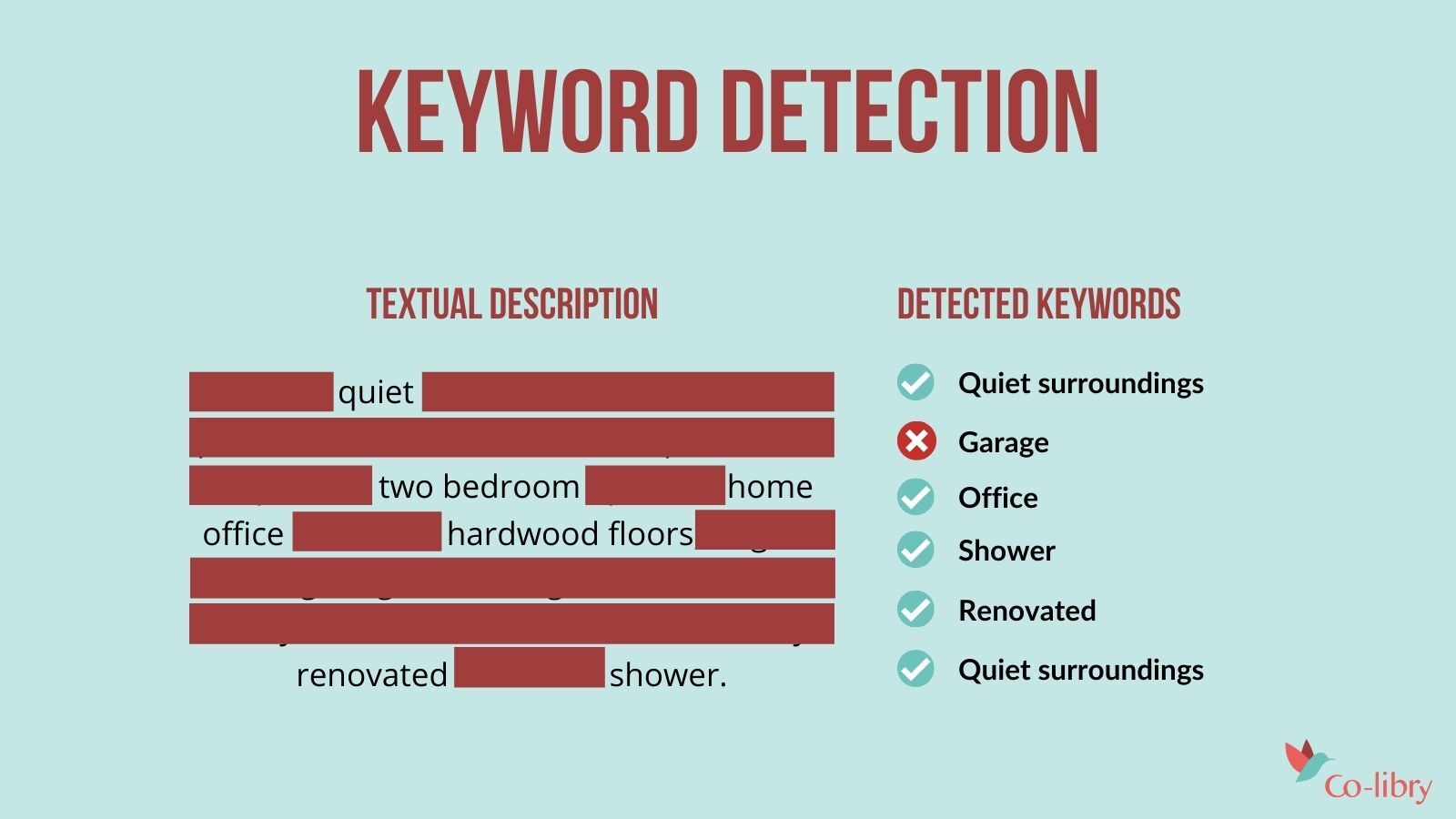 We had the industrial revolution back in the 1800s, the internet revolution in the 1990s, and now, we’re living through the age of AI.

Artificial intelligence is changing the way we live, work, and the very way we look at the world. You can find AI everywhere. It’s present on your phone, in your home devices like Google Home, the spam filter in your email, it’s even used for autopilot features on commercial flights! We live in a world so abundant in AI that you’d struggle to find places without it.

Here we’re going to explore the ways the Natural Language Processing (NLP) branch of AI is shaping the real estate sector. We’ll delve into what NLP is, and how you can use it to create advertisements, draw insights, and ultimately improve user experiences. Let’s take a look.

You will read about the next topics:

Too much to read right now? Download the blog here in PDF:

What is Natural Language Processing?

Natural language processing or NLP is one of the hottest areas of AI today, and this looks set to continue into the future. The goal of NLP is to enable computers to understand and process human languages, thereby getting computers closer to a human-level understanding of language.

Despite all the things that human beings are great at, processing huge quantities of data extremely fast isn’t one of our talents. We’ve come to realize that computers excel in this area in ways we cannot. Computers are great at working with standardized and structured data like database tables and financial records.

The problem is that humans don’t communicate in “structured data” nor do we speak binary. We speak and write using words, a form of unstructured data.

This is why your PC or Mac doesn’t have the same intuitive understanding of natural language that humans do (not yet at least). They can’t really understand what the language is really trying to say. They struggle to understand the context and the nuances of language (dialects, slang, accents).

With NLP algorithms, we can get our computers closer to that deeper human level of understanding language. Today, NLP enables us to build solutions like chatbots, language translators, and automated systems to recommend the best Netflix TV shows.

Why is NLP important?

There is a large volume of textual data

Natural language processing helps computers communicate with humans in their own language. For example, NLP makes it possible for computers to read a text, hear speech, interpret it, measure sentiment, and determine which parts are important.

Today’s computers can already analyze more language-based data than humans. When you also consider that computers don’t become fatigued and are more consistent (less prone to error or external pressures), it’s easy to see why there’s such buzz surrounding NLP.

The human language is extremely complex

There are infinite ways to express ourselves, both verbally, and in writing. There are currently close to 7000 living languages in existence, and each has its own unique set of grammar and syntax rules. When you also add accents and dialects to this, the complexity of human language is truly astounding.

It’s not just the sheer number of languages that makes understanding language so complex. When writing, we often misspell or abbreviate words, either out of error or because understanding is implied. When we speak, we have regional accents and borrow terms from other languages to fill the gaps in our native language.

While deep learning is now widely used for modeling human language, there’s also a need for syntactic and semantic understanding, as well as domain expertise that is not necessarily present in these machine learning approaches.

NLP is important because it helps resolve ambiguity in language. Additionally, it adds useful numeric structure to the data for many downstream applications, such as speech recognition or text analytics.

“ Natural Language Processing or NLP is a field of Artificial Intelligence that gives the machines the ability to read, understand and derive meaning from human languages. “

A traditional search on a property portal will only display results based on the metadata (for example price, address, surface, and the number of bedrooms). However, every real estate website also has lots of information stored in the text descriptions on a listing. These listings often contain real estate related keywords that are not available in the metadata but can be extremely useful to visitors. It seems wasteful to not utilize this data.

Thanks to NLP, the descriptions of a listing can also be utilized when presenting search results. This allows real estate website visitors to discover properties that wouldn’t have been shown using traditional approaches.

4 use cases of NLP for real estate

Often, this information is not included in the metadata at all, and when it is, the metadata is often incomplete or incorrect. When this happens, users will often have a poor experience when using the search feature. They might entirely miss properties that would be a perfect fit for them, or be shown properties that simply aren’t relevant. Either way, the user has a poor experience.

Here are 4 uses cases of NLP in real estate:

NLP engines can extract real estate related keywords in the text-based description such as terrace, kitchen, bath, shower, garage, fireplace, surface, amount of bedrooms, and more. Users can be presented with the information that’s most important to them and spend less time endlessly searching through listings. 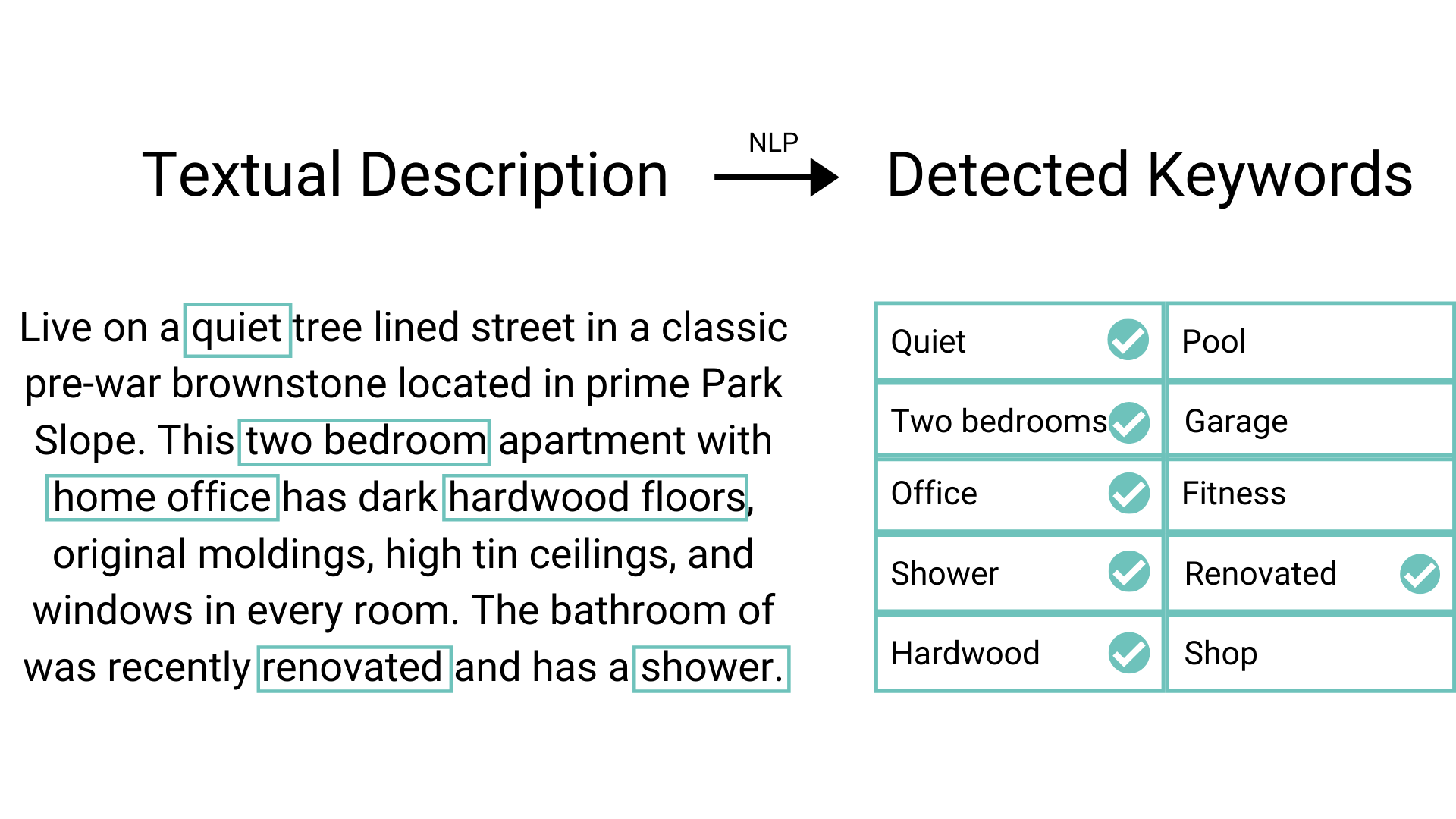 Validation of the metadata

The metadata (information that is searchable by the search engine) can be validated with NLP to see if a certain listing contains the wrong data.

For example, let’s say a real estate agent fills in the information for the property and forgets to fill in the plot size. If someone is doing a search for properties with larger plot size, the house or apartment will not show up in the search query. 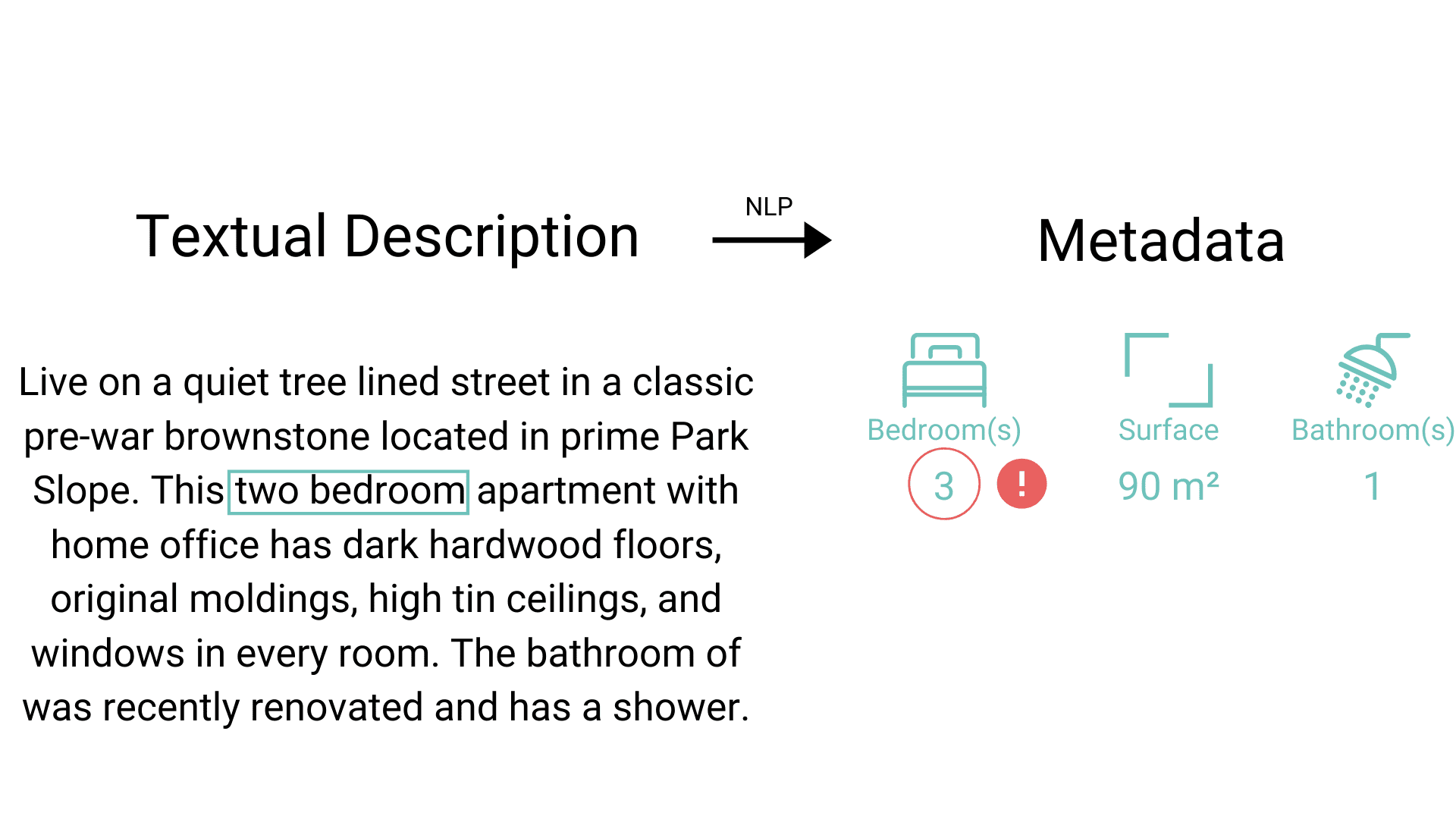 We’re firmly in the digital age, and people’s search habits are changing. Today, users are much more specific about what they want when using search engines.

It’s now much more common for users to search terms like ‘4 bedroom house child-friendly Amsterdam’ or ‘2 bedroom apartment Brussels with balcony’. By creating tons of SEO pages built for long-tail keywords will potentially increase your traffic on Google.

Extra keywords such as a balcony, fireplace, and more are extracted from your listing descriptions through Natural Language Processing. Based on the data you get, you can generate long-tail SEO listing pages combined with an effective URL on your webpage. 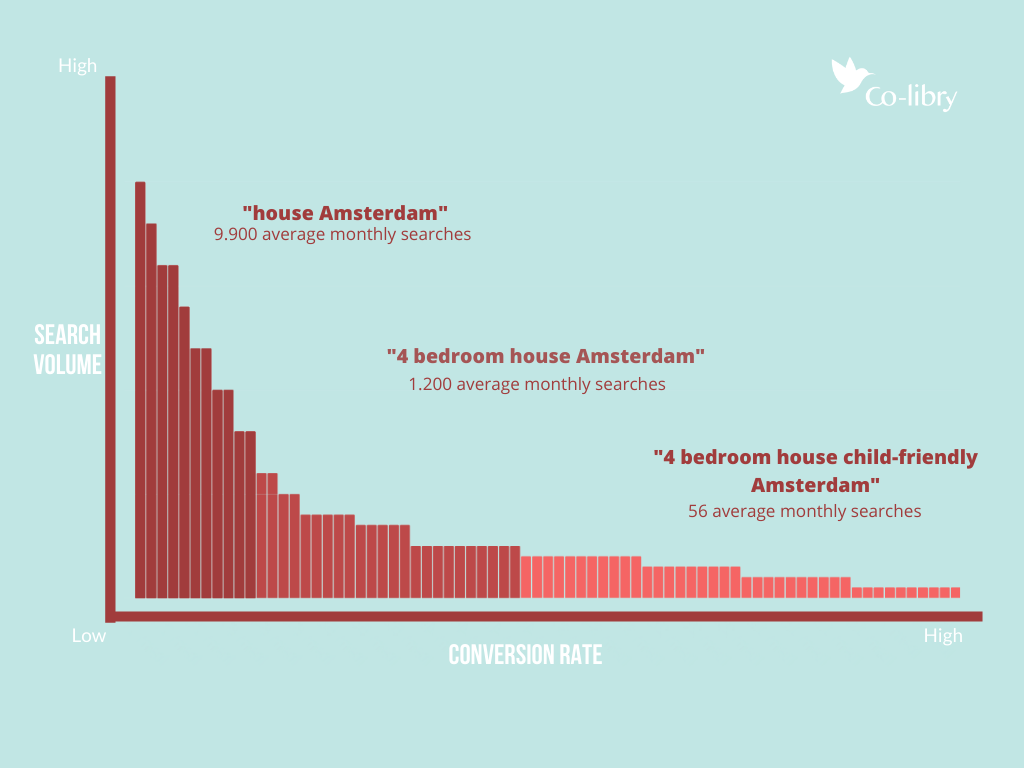 Autocompletion of the metadata

The last use case possible with NLP for real estate is using the detected keywords, autocorrect, and completing the metadata. By doing this, all relevant listings show up in the search results.

Based on our last research, 18% more features are processable by the search engine on average. 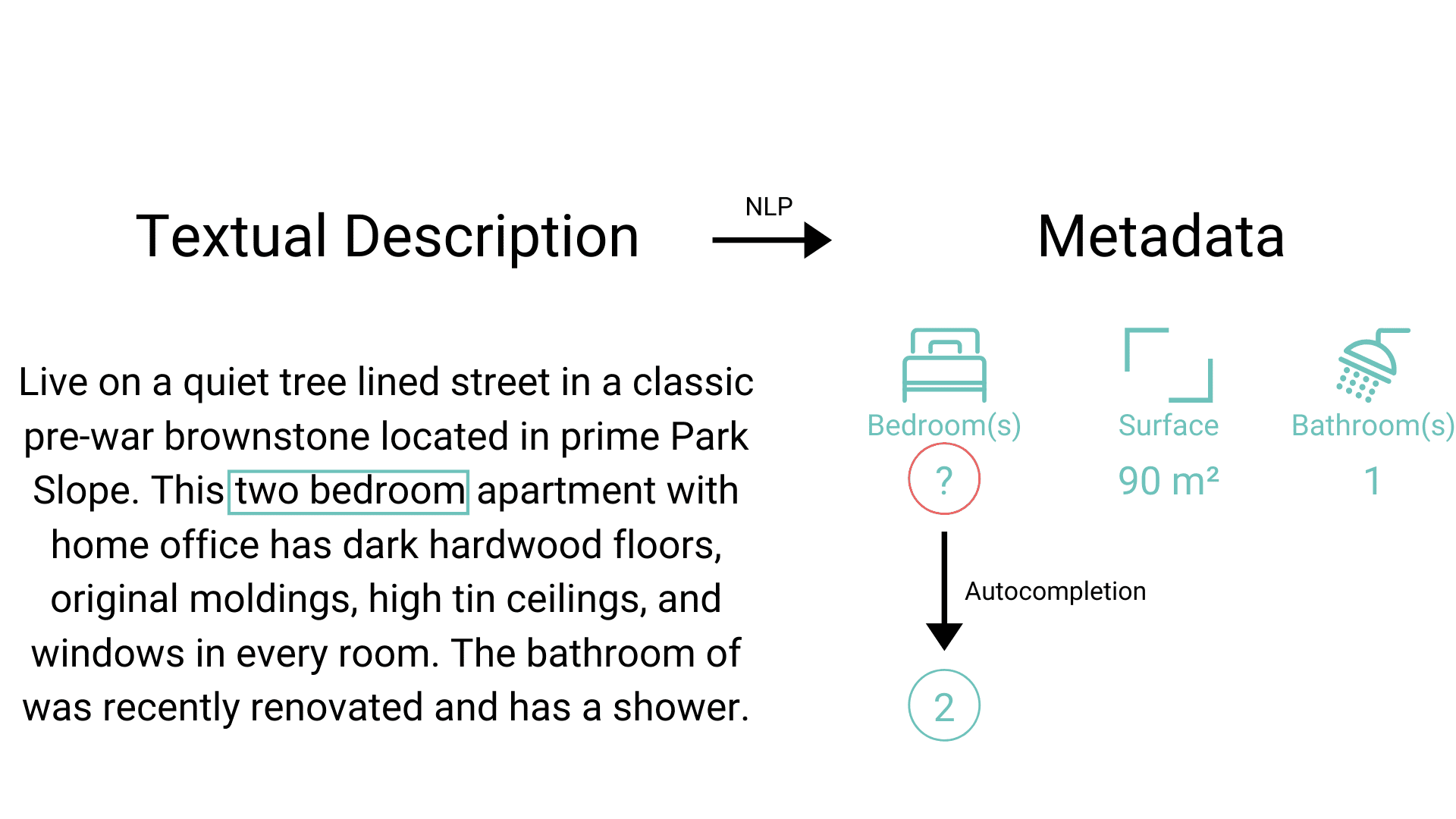 The future of NLP for real estate

A lot of industry decision-makers are aware of the disrupting potential of AI-enabled algorithms, so they’re exploring the use cases as you’re reading this.

AI is still in its infancy in the real estate sector, but we’re already seeing highly effective algorithms being pushed to market. Although real estate companies are notably progressing toward better data sets, the majority of accumulated data remains siloed and lacks standardization.

The faster organizations adapt to this growing trend and learn how to harness their data, enforce standards, and work with AI, the faster they will experience the exceptional benefits of AI.

Natural language processing will undoubtedly be used in real estate in the future to improve the user experience. This is just the beginning.

Looking for an NLP solution for your real estate website? Schedule a free demo today with us and discover the power of AI, made for real estate.

Too much to read right now? Download the blog here in PDF: 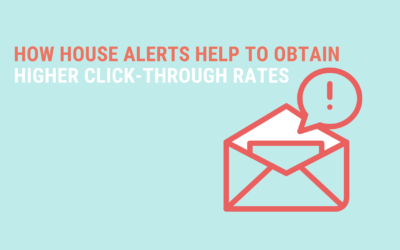 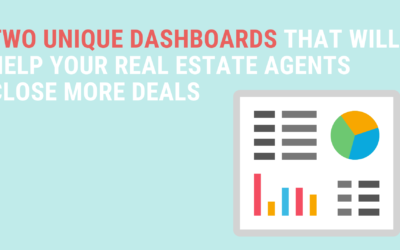 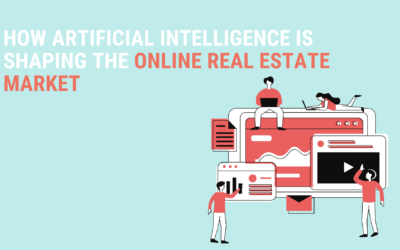